René Char – “Lucidity is the wound closest to the sun.”

Char was a friend and close associate of Albert Camus,[1] Georges Bataille and Maurice Blanchot among writers, Pablo Picasso, Joan Miró and Victor Brauner among painters. He was to have been in the car involved in the accident that killed both Camus and Michel Gallimard, but there was not enough room, and returned instead that day by train to Paris.

The composer Pierre Boulez wrote three settings of Char’s poetry, Le Soleil des eaux, Le visage nuptial, and Le marteau sans maître. A late friendship developed also between Char and Martin Heidegger, who described Char’s poetry as “a tour de force into the ineffable” and was repeatedly his guest at La Thor in the Vaucluse 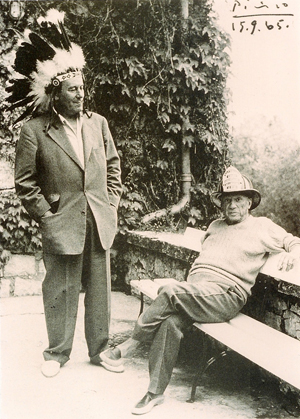 Protesting with Picasso on the heights of the Mont Ventoux against the nuclear installations.

Resistance in Every way

obey your pigs who exist;
I obey my gods who do not.

Forehead Of The Rose

Despite the open window in the room of long absence, the odor of the rose is still linked with the
breath that was there. Once again we are without previous experience, newcomers, in love. The
rose! The field of its ways would dispel even the effrontery of death. No grating stands in the way.
Desire is alive, an ache in our vaporous foreheads.

One who walks the earth in its rains has nothing to fear from the thorn in places either finished or
unfriendly. But if he stops to commune with himself, woe! Pierced to the quick, he suddenly flies to
ashes, an archer reclaimed by beauty.
René Char