Les Biller goes to the studio 7 days a week. If you can paint like a wizard you would too. Every first Sunday of the month his studio is open for visitors from 2 pm to 5 pm. 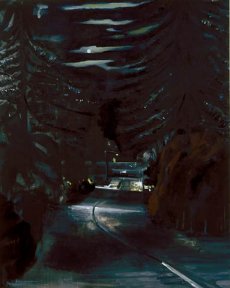 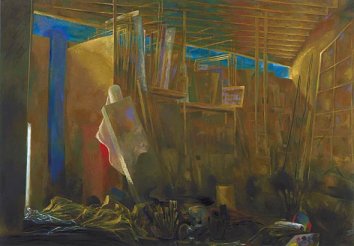 His early start as a writer is reflected in the choices of titles for his paintings. The titiles like The Russian Envoy, the Manchurian Candidate are often witty and allusive. While studying at the University of Hawaii Les met Sumiko from Japan and got married. He went to study in Japan under a Fullbright scholorship. Patterns from Kabuki theater, Japanese folding screens, Oscar statuettes and desperate housewives all collide in rich vibrant colors and presented in a coherent dramatic fashion. The Cry of the City series deal with darker themes of decay, fear and chaos of the sprawling freeways, wires, debris from the city of Angels.

“After the conclusion of the games Poppaea died from the casual outburst of a rage from her husband (Nero) who felled her with a kick when she was pregnant” Tacitus, Annals from the Book XVI 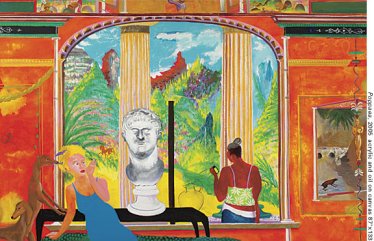 (Find the enlarged version from his homepage – Open Studio 2005 October. You can see the cute Oscar Statuette on the right hand column)
See more paintings and get the directions to his studio from his beautiful homepage.