NONFICTION FILM – MOVIES – Experiments in terror – Director Barbet Schroeder has a particular flair for films that expose the evil that walks among us.(LAtimes)

I was using Verges as a way to tell the history of terrorism, using him to lead us into the world of terrorism. It all started with the war in Algiers. It ended with the two towers in New York. But it didn’t end with the two towers, unfortunately. Never before Algiers did you have blind terrorism attacking people in cafes who were guilty of being part of a race or group. The Palestinians after that took their lead from the Algerians. This was the story of the film, to see how terrorism evolved from the very beginning, when it was more beautiful and heroic and got corrupted rapidly.(Via) 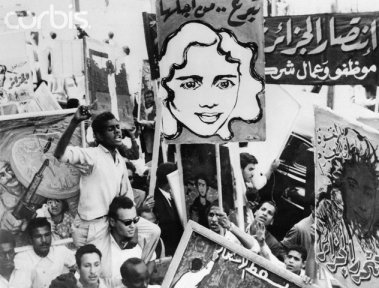 Celebration of “Algerian Day”, carrying the portrait of Djamila Bouhired.

Jacques Vergès married Djamila Bouhired and in his late career he defended Klaus Barbie and other monstrous killers.

Verges defended German Magdalena Kopp, wife of Carlos the Jackal and may have been her lover. Verges seems to have had a lifelong sexual attraction to terrorist women such as Djamila and Magdalena. In the film Verges is an enigmatic figure who enjoys enhancing his own myths. He disappears for eight years 1970-1978 and is rumored to be in Cambodia (era of the Khmer Rouge) but seems to have been mostly living in a small hotel in Paris hiding from the family of an African dictator who Verges promised to get released from prison but the dictator died instead. The extended section of film on Carlos the Jackal was possible because Carlos spent much of his time “hiding” in East Germany where the GDR’s Stasi dedicated an entire division to following his every move, copying his correspondence and recording his phone calls. Schroeder is able to tap this goldmine of information including recordings of Carlos’ own voice ranting that he knows Verges has been sleeping with his wife.

What will surprise is the breadth and veracity of Jacques Verges activities over the last half century. It reads as a who’s who of the revolutionary / terroristic movements of the world. (Member review from Lovefilm)

Portrait of artist as a young terrorist (Amitava Kumer)